One of the perks of being a professional illustrator is getting complimentary 4.5-day passes to the San Diego Comic Con. I’m also usually able to take a guest for free, but they limited the amount of guest passes they were issuing this year. If you didn’t register within the first few hours, you were out of luck. 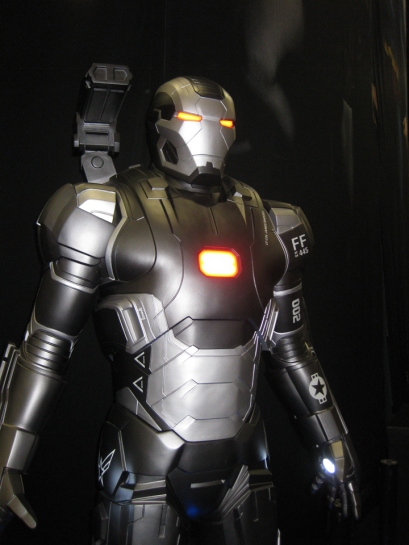 In recent years, the parking situation has been improved by the pre-selling of parking passes. This has eliminated having to arrive unnecessarily early in order to snag a spot at the convention center or at the Hilton, next door. It has also eliminated the traffic congestion in front of the convention center, since those without parking passes don’t bother to drive up to the building.

Preview night was incredibly swamped, but Thursday was a little lighter — not because there were fewer attendees, but because many were attending panels or waiting in lines upstairs or outside. This is not to say Thursday’s floor traffic was light — if you’re demophobic, you still wouldn’t have lasted two seconds. I also noticed fewer people in costumes. I suspect many attendees were saving their costumes for the weekend. I really didn’t get any great pics, but hopefully the ones posted here will suffice.

There’s really no one I desired to see so badly that I was willing to endure spending all of my time in long, sweaty lines, so I pretty much avoided the panel discussions altogether. I’m mostly interested in walking the floor and seeing what’s new, and maybe purchasing an art book or two. I can pretty much cover the floor and see everything I want to see on Preview Night and Thursday, so I don’t make the fullest use of my 4-day pass. Oh, well. I figure I’m helping other attendees by eliminating one more body from the overcrowded aisles. Besides, you can learn a lot just by talking to folks at the booths on the floor.

I got some useful advice from Bobby Chiu on the use of social media, and other artists helped with info about self-publishing and other subjects. It’s also fun talking to well-known artists and discussing their work with them.

Being a freelance artist in the digital age, I often work for people and companies who live far away, or with whom I’ve otherwise never met in person. A couple of years ago, I got to meet some people from a Canadian company for whom I had worked. At last year’s Con, I got to hook up with a friend with whom I’ve worked, but whom I’ve never met in person. This year, I got to meet other people with whom I’m currently working on a project for Roddenberry Entertainment. I don’t post my picture on Facebook, so one particular friend didn’t even know what I looked like. I had the advantage on him, because I knew what he looked like from his FB account. So it was interesting meeting him face-to-face for the first time. 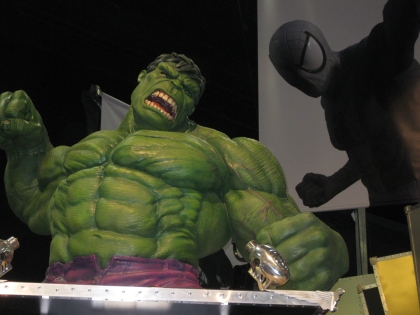 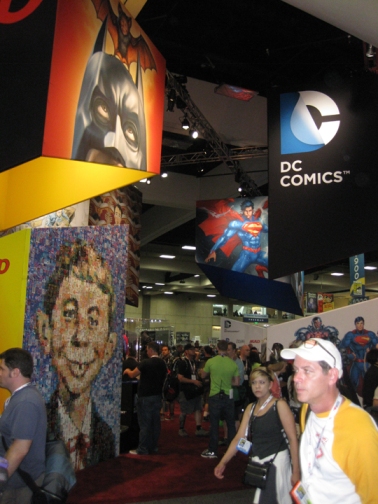 The Con floor was dominated by large entertainment companies as usual (which is why this is less of a comic convention than a pop-culture convention). Such booths dominate considerable floor space and yet seem to have the least amount of content. You might find a film company hogging up twenty spaces with a giant display, just to promote a single film or television series. Even video-game companies covered lots of real-estate for a single title. I tend to enjoy the smaller booths occupied by artists who are trying to promote their work, or book dealers. 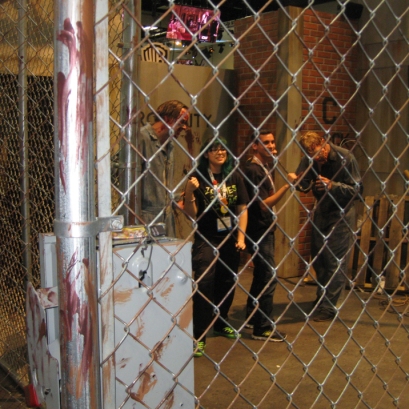 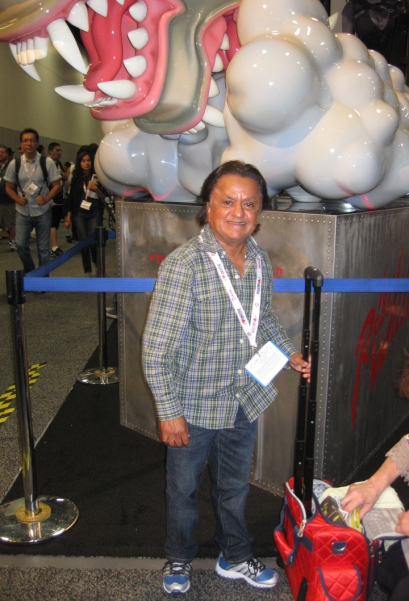 My must-visit booths are Bud Plant Books, Vanguard Publishing, and Flesk Publishing (and Stuart NG, if I have the extra cash). These booths usually carry any books which fit my interests.

Bud Plant’s booth isn’t nearly the size it used to be, due to the nature of the book market and the fact that Amazon is killing small, independent dealers. However, he seems to be surviving, so that was a positive sign. For those interested in art books, I would encourage you to support independent dealers like Bud Plant. His prices are not always as competitive as Amazon (for the same reasons most dealers can’t compete with Amazon’s prices). However, he often carries specialty items not found on Amazon, or he has relationships with the artists which allows him to offer signed editions and signed bookplates, for the collectors among you who want something more than what Amazon can offer. Stuart NG carries specialty import items and harder to find OOP book as well.

I only bought a couple of books this year. My bookshelves at home are literally overflowing, so I don’t know where I’m going to cram two more books. I also took a serious look at the Cintiq 22 HD Touch at the Wacom booth, and I’m considering ordering one. If you’re interested in getting a slight discount, drop me an email and I’ll share the promo code for their show special (it’s only $100 off, but a buck is a buck, so if you want to buy now, I’ll share the info).

I had skipped breakfast and lunch on Thursday, so by the end of the day I was pretty hungry, and my feet were killing me. I, along with a bazillion other Con attendees, wandered across the street from the Con and had dinner at the Gaslamp Quarter, where the surrounding building were covered with the usual film ads. 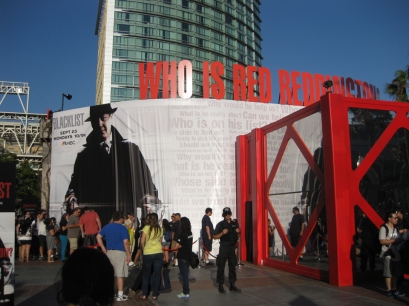 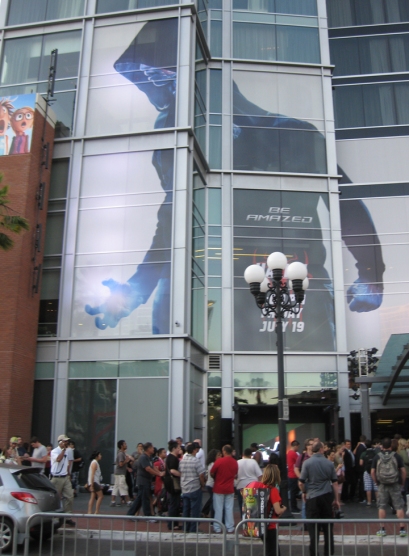 After filling up on fish & chips I made the drive home, a couple of hours north of San Diego (living within driving distance saves me the cost of an airline ticket and hotel). When I arrived, I didn’t bother to go through my bag of goodies or unpacking. I pretty much just hugged my family whom I missed, and which I hit the sheets and passed out.

So how about yourself? Anyone already home from the Con, or have big plans to attend this weekend?

Some of these pics were taken by my buddy after my camera battery died. Unfortunately, he was using his phone camera, so they’re blurry (which is how you can tell which shots are his).

The convention’s Events Guide used to be an all black and white publication. In 2008, the Con directors decided it was time to go to color, and they commissioned me to create an illustration for the cover which reflected a few of that year’s themes, which happened to be editorial cartoons, Superman, and Batman (among others). Being an election year, I threw them all into a blender and came up with this cover. (At a run of over over 125000, this will likely be the largest print run my work will ever see.)

Here are some pics my friend took from the Con a coupe of years back: Pics_SDCC_2010